Get Our Premium Online Course "Reclaiming Eros" for $25 Only

For a limited time only

Get Reclaiming Eros Self-Study Course For Just $25 (instead of $297)!
When you purchase  A Return to Eros on Amazon NOW...
Just follow the simple 3-step process below. 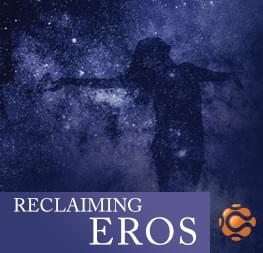 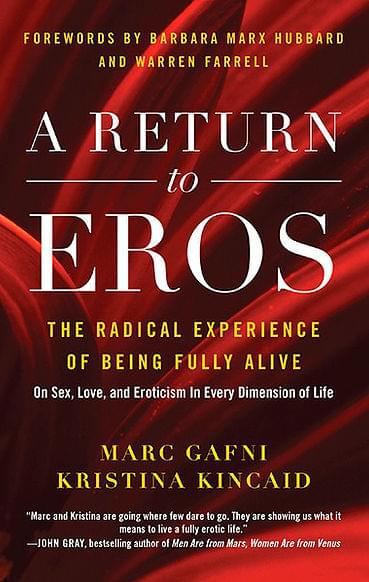 Do you know what it feels like to be filled with potency and passion in all areas of your life? Unfortunately for most people, it’s a life-long quest that at best may be realized for a fleeting moment or more likely... something that always seems just out of reach.
But for thousands of years evolutionary mystics have known that the elixir of the passionate, potent, purpose driven and poignant life is the activation of  the latent powers of Eros within.

“Eros is the experience of radical aliveness moving toward - DESIRING - ever-deeper contact, or ever-deeper intimacy, and ever-greater wholeness. That’s the relativity equation of the inner physics of Kosmos.”
- Dr. Marc Gafni
So, what does Eros feel like on the inside?
What Eros feels like on the inside is pleasure.
When there is a failure of Eros - fragmentation - we have suffering.
That’s the structure of reality.
A Personal Message from Dr. Marc Gafni:
"In this moment that we are in, in the midst of breakdown - in the midst of uncertainty - in the midst of catastrophic and even existential risk - that breakdown is sourced in a failure of Eros. There are multiple levels of the failure of Eros that brought us to this moment and multiple reasons why we haven’t focused our intention to prepare for this moment.
The invitation of this moment is to evolve the source code, to tell a new story, a new story of identity, of community, a New Universe Story. We need to restore Eros - or even evolve Eros.
Intimacy is one of the qualities of Eros. So the evolution of intimacy, the reclaiming of our knowing that we are unique incarnations of Eros in a CosmoErotic Universe, is the essence of this moment, which is why we are offering you this opportunity to
~~~
Buy A Return to Eros
and get the online course "Reclaiming Eros"
for only $25.
~~~
That is why we are focusing on Eros in the middle of a pandemic. Eros is not extra. The problem is a failure of Eros.
Every failure of Eros then births a complete failure of ethics. It is a crack in our wholeness, in our wholeness of identity, and our wholeness of One World. We split off Wuhan, China. But there is no possibility like that. It is One World.
What used to be true is: Whatever happened in China didn’t have anything to do with what was happening in Holland. There were only vague connections along the silk trail. Occasionally, there were potential clashes but basically it took hundreds of years for them to play out.
Today, because we have forgotten what no-boundary consciousness is, that’s what the virus reminds us of. The only way to heal the virus is with a deeper virus - a deeper virus in the sense of a viral explosion of a deeper contagion (which comes from the same Latin root as the word contact). And that deeper contagion is the New Universe Story. "
- Dr. Marc Gafni
~~~
When most sincere modern seekers hear the word ‘Eros’ they think of sexual desire and of particular forms of sexual desire. Sex however is not Eros. Sex models Eros. It does not even begin to exhaust Eros. Culture, for a series of good and bad reasons, has exiled the Erotic to the sexual, when in truth, the sexual models the erotic. But the great invitation of spirit is to live an erotic life in all of the non-sexual dimensions of your life.
Eros and its expressions as desire and intimacy have gorgeous expressions in the sexual but they also completely transcend it! Intimacy and desire are the twin qualities of spirit that define our aspiration in every dimension of life.

Once you understand this critical distinction you literally unlock the door to the secret that the mystics have known for centuries:
Eros lives in, as, and through each of us.
And when you learn how to activate its latent powers within, all aspects of YOUR LIFE will be filled with potency, passion and purpose.  YOU will become UNSTOPPABLE - whether or not a particular project flourishes in the exact way your hoped.

And your success in activating your deepest heart's desire will increase exponentially. And you will begin to naturally realize that your deepest heart’s desire is the very desire of evolution - the divine evolutionary impulse - awakening in you, as you, and through you.
For a limited time you can activate the hidden power of Eros in your life for only $25 (instead of the usual $297)!
Right now, you can get our paradigm-breaking course, Reclaiming Eros with Dr. Marc Gafni, renowned thought leader, visionary and wisdom teacher for $25, when you purchase  A Return to Eros on Amazon NOW.
Just follow the simple 3-step process below.

STEP 1.
Click the orange button below to purchase your copy of A Return to Eros on Amazon:
Purchase A Return To Eros Now and get Reclaiming Eros Self-Study Course ($297 value) for $25 only!
STEP 2.
After Purchasing the book, click the button below:

Click to Claim Your Course for Only $25 After you have purchased A Return to Eros
STEP 3.
Purchase the Course for $25 only and we’ll send you detailed information via email about how to access the Reclaiming Eros Self Study Course so you can get started with your first lesson!
Introducing Reclaiming Eros
RECLAIMING EROS is a 9-lesson course that teaches you how to reclaim Eros and live a fuller, more complete life full of love…. in all areas!
Each week of this self-study course you’ll receive a series of audio lessons, videos, exercises, and downloadable handouts. The main course includes eight module-specific quizzes & one (optional) final exam, as well as supplemental teachings.

Get Reclaiming Eros for $25 only ($297 value) when you purchase the companion book A Return to Eros on Amazon NOW
When you participate in this course you’ll learn how to:
Here's an overview of what is covered in Reclaiming Eros:
Lesson 1. Enlightenment Is Beautiful, But It Ain’t Pretty
Lesson 2. Frameworks and Dharma Matters
Lesson 3. The Sexual Models the Erotic
Lesson 4. Every Crisis Is a Lack of Imagination
Lesson 5. The Sexual Models Radical Giving
Lesson 6. The Secret of the KISS
Lesson 7. The Paradox in Giving Up Control
Lesson 8. The Holy Trinity
Lesson 9. Your Sacred Obligations
If you're ready to activate the hidden powers of Eros in your life, click the orange button and come back to this page to enter your information above!
Purchase A Return To Eros Now and get Reclaiming Eros Self-Study Course ($297 value) for $25 only!